Most Honda V6 engines leak oil from the front plate. The front plate is actually the oil pump of the engine and it is located behind the timing belt assembly. 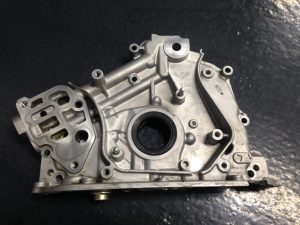 Front Plate Assembly: This is the oil pump assembly for Honda and Acura V6 Engines. It is located directly behind the timing belt. The large hole in the middle is where the front pulley comes through.

The seals that are associated with this front plate are sealing pressurized oil. Over time, these rubber seals will shrink, get hard and brittle. This happens because of a few reasons. First, rubber and petroleum don’t naturally like one another. Over time, the oil will break down the rubber that makes up the seal’s construction. Second, these seals are constantly warming up and cooling off, every time the engine is started and shut off. After about 10 years, these seals have heated up and cooled off hundreds of times. In addition, the Honda engine components are mostly aluminum construction. When it gets cold, the aluminum shrinks and during engine warm-up, the vulnerable sealed areas leak oil even more. As the engine reaches operating temperature, the aluminum expands and a better sealed area will result. 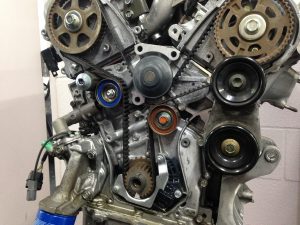 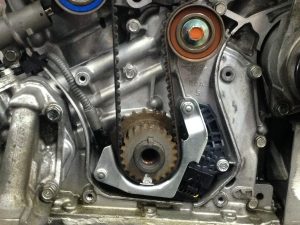 The front plate is straight ahead, but has all related engine components attached. The gear at the bottom of the photo is the front of the engine crankshaft 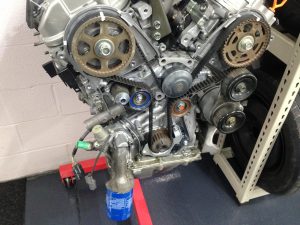 Come in and see why Accurate Automotive, Inc. is the best place in Nashville and Middle Tennessee to purchase and service your Honda and Acura automobiles.